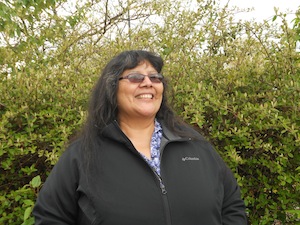 Maria learned basic sewing techniques from her mother, Lolita Greeley. When she was six years old, Maria began learning the arts of stringing beads, the peyote stitch, flat beadwork, and looming from her older sister, Joan Selam Greeley. Maria explains that her necklaces represent where her people come from, the Columbia River, particularly well. The pieces include many of the region’s important types of materials as well as the technique of beading.

Traditions are important to Maria. Besides making beaded items for exhibit and sale, Maria participates in tribal traditions such as making cradleboards and preparing for cultural ceremonies. Maria also helps with another aspect of the tribe’s work. She serves as the Court Administrator for the Confederated Tribes of Warm Springs Reservation of Oregon. When we saw each other in Portland recently, I asked Maria about her new (old) position.

Maria served as the Probate Administrator for the tribes for three years beginning in 2008. She first took the Court Administrator position in 2011. After taking a year off to pursue her beadwork business full-time, Maria returned to her Court position. She enjoyed the year when she and her family could travel to pow-wows and expositions around Oregon and Washington and see the regalia work by people from different tribes. However, Maria also loves her work with the tribal court.

“I like everybody I work with,” Maria said. People who work for Maria like their jobs too, probably because Maria is “hard but fair.” Her goal as a supervisor is to “lead by example.”

What does Maria actually do? She makes sure that the courts are fully operating and that the public and employees have a good environment. Sometimes that means taking care of plumbing problems; sometimes it involves soothing people’s nerves. Maria explained that unless people are coming to the court to get married, they are probably there for a negative reason and tend to get upset easily. To deal with these situations, “I listen,” Maria said. “I can agree with how they feel and give them options.”

I asked Maria whether formal training had given her the tools to handle difficult situations. Maria received a BA in Business Administration from Marylhurst University in Oregon and two AA degrees (in business and accounting) from Yakima Valley Community College in Washington. She said, however, that life experience has proved the most useful in figuring out how to help other people to solve their problems. “All my life I’ve had to deal with problems,” said Maria, like having to take defective air conditioners back to the store. She learned from experience that instead of getting angry she simply had to learn how to deal with difficult situations.

Maria has “so many ideas” to make things better for the courts, but lack of funding sometimes prevents her from making the improvements she’d like. Recently she dealt with a need for funds by writing a letter to the Bureau of Indian Affairs. Her formal request led to a $170,000 award to the courts to purchase JustWare, a legal case management software program.

Maria married Victor Godines in 1997. Victor participates in the family’s artistic life by making dream catchers in several colors and sizes. Victor was raised in the state of Oaxaca in Mexico. There he learned all the skills necessary to produce—entirely by hand—eight-foot yolks that fit on the oxen that farmers used to plow their corn. Maria’s three daughters are Melissa, Melinda, and Victoria. The youngest and a freshman in high school, Victoria is learning “all the Native arts skills” from her mother.

Maria was born and raised in Portland and lived for many years in Yakima, Washington. However, when she moved to Warm Springs in 2002, it was “like moving home.” This feeling probably occurred because Maria’s mother was from Warm Springs, and the family visited the reservation often during Maria’s childhood. Once “back home,” Maria has immersed herself in the work of the tribe. From practicing beadwork and other Native Arts to working for the courts, Maria has truly found success and satisfaction.

This is a text widget. The Text Widget allows you to add text or HTML to your sidebar. You can use a text widget to display text, links, images, HTML, or a combination of these. Edit them in the Widget section of the Customizer.
Loading Comments...
Comment
×
%d bloggers like this: