Judith Meyers’s papercut art is featured on the Handcrafted Art Traditions online gallery. Judith has used her papercuts and other art forms to enrich lives in her community of Greeley, Colorado, since she moved there in 1964. For many years Judith’s designs symbolized fun and learning in printed materials distributed by the city’s museums. And for decades Judy has volunteered her time at public events by cutting the silhouettes of thousands of Greeley children. Judith was a founding member of Madison and Main, a cooperative gallery in Greeley that provides the small city, which serves as the center of an agricultural county, with a consistent but evolving creative focus.

For over 40 years, Judith has also used her art to express her support for women’s rights, peace, and other types of social and environmental justice. Some of Judy’s artistic endeavors, like her research and quilting for Judy Chicago’s Birth Project during the 1980s, have been national in scale. For other artistic statements, Judith has used scissors, paint, and paper to display her opposition to human-caused problems in her own area of the West.

In an exhibit titled “Doves, Nukes, Hearts, and Junkyards: the Protest Art of Judy Meyers 1966-2013,” Judy has assembled about 23 pieces to celebrate this art of opposition. The show was held at the Unitarian Universalist Church in Greeley in January and February of 2014.

Judith used “High Plains Burial,” a 2006 papercut, for her exhibit announcement. In this piece Judy imagines one of the missile silos, underground cylindrical storage facilities that dot the plains of northeastern Colorado as well as land in Wyoming and Nebraska. Some of these facilities still house active intercontinental ballistic missiles. In the area surrounding the black missile shape and its housing in the lower center part of the papercut, Judith depicts evidence of an earlier disaster that occurred in the same region: bones from millions of buffalo killed during the 19th and early 20thcenturies.

Three watercolor pieces in the exhibit, including the two pictured here, are collectively titled “Colorado Forests in their Death Throes.” Judith’s purpose with these paintings was “to show the effects that pine beetles, drought, fires, floods, and mud slides have had on our mountains.” She said that after a 2010 trip to the Rocky Mountains, “it seemed wrong to continue painting [the forests] as gorgeous green, beautiful and picturesque.” Judith explained that these paintings belonged in her protest exhibit because the conditions leading to the trees’ dying are indicative of global warming and climate change.

“Speaking Tree” is a recreation of Judy’s 2001 entry for Greeley’s annual holiday  “Festival of Trees.” In earlier years, Judith had been inspired by photographs of masks engraved over ancient Chinese bronzes to cut whimsical paper masks that fit over people’s glasses. Her inspiration for the 2001 Speaking Tree came from an ancient legend of the Indus Valley that tells of a tree that could answer questions in any language. The legend further tells that Alexander the Great consulted the tree as he was preparing to invade India; the tree advised him to turn around and go home. Judith created her post 9/11 Speaking Tree with a sincere hope that President Bush would encounter similar advice and decide to back down from sending US Forces to invade Afghanistan. 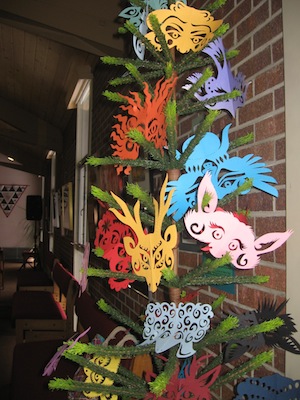 In three pieces from 2008, Judith expresses clearly the hopeful sentiments that imbue her work—protest or not. Judy created the stylized text-based designs because of the connection she feels with her Pennsylvania German great grandmother, who as a young scholar learned to produce “illuminated quotations” or “fracturs” from a teacher who excelled at that art form. The many papercuts that delight Judith’s fans also allow the artist to explore her German heritage.

The quotations in Judith’s fracturs: “The profit of the earth is for all” (Ecclesiastes 5:9 in the Bible); “Love is the only every god” (E.E. Cummings); “Blessed are the peacemakers for theirs is the path of love” (variation of a verse from Matthew in the Bible). 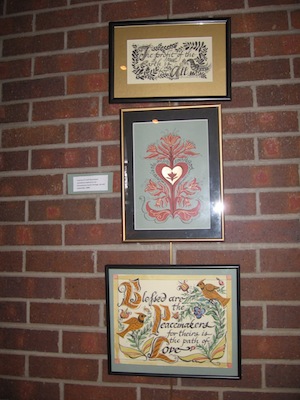 Judith Meyers passed away in 2016. Her friends, students, and the collectors of her papercuts and paintings will remember her forever.

This is a text widget. The Text Widget allows you to add text or HTML to your sidebar. You can use a text widget to display text, links, images, HTML, or a combination of these. Edit them in the Widget section of the Customizer.
Loading Comments...
%d bloggers like this: